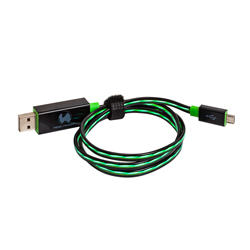 Of course the RealPower micro USB LED floating cable can be used for a pure data
transfer as well.